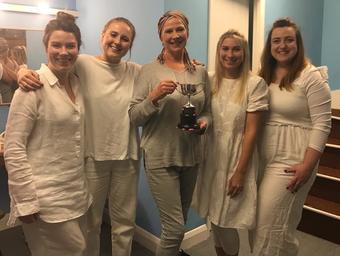 Congratulations to the cast and crew of 100.

At Woking the play won the cup for Third Place together with the Best Actress award for Frankie Godliman. In addition there were nominations for Michelle Blake and Ian Santry for the Lighting and Sound respectively.

Sadly no silverware at Spelthorne but the Adjudicator Paul Fowler nominated the production in five categories - Sound, Lighting, Nancy Lund as Director, Frankie Godliman as Best Actress and the Adjudicator's Award for the ensemble set pieces during the play performed by Amy Horn, Meg Pike, Sophie Cutcliffe and Amelia Woodhouse.

rdg.org uses cookies to track visits and to enable some functions, an essential one of which has already been set. You may delete the cookies on this site, but some parts of it may not work. For more information, see here. To remove this message and accept cookies from this site, please click on the button below.